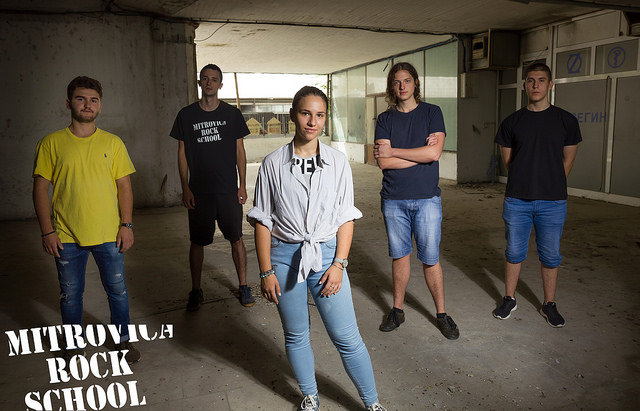 Southeast Europe’s first rock school, the Mitrovica Rock School, is excited to announce the release of the debut album ‘Voices’ from the band High Frequency. Made up of Albanian and Serb youth from the divided city of Mitrovica and a lead singer from Skopje, Macedonia, the album is the first from an ethnically-mixed band to come out of the school, since its founding in 2008.

Made up of five band members between the ages of 15 and 22, the band’s sound hints at influences from Korn, Bad Religion and progressive metal. When asked about the name of the album, the band says, “There are so many voices out there. Voices of insecurity, information, advice – it can tell you beautiful lies or the ugly truth. We all have our own voice and it’s up to us to decide which voice to listen to, to follow.”

Co-founded by Musicians Without Borders, the school connects Serb, Albanian and other youth in the city of Mitrovica. The Mitrovica Rock School applies innovative educational approaches such as band-based education and learning to increase cultural participation between diverse youth from all areas of the city.

In a city where over half the population is unemployed, The Mitrovica Rock School gives young people the opportunity to engage creatively with each other through music. Having reached 1,200 young people, the school held 17 concerts and 145 inter-ethnic workshops and band sessions in 2018 alone.

“In the face of political instability and division, the band crosses ethnic and creative lines and affirms that music can connect communities.” says program manager Wendy Hassler-Forest.

‘Voices’ is available for free streaming and download on SoundCloud.

‘Voices’ was recorded by Goran Ristevski and produced by Emir Hasani.

About the Mitrovica Rock School