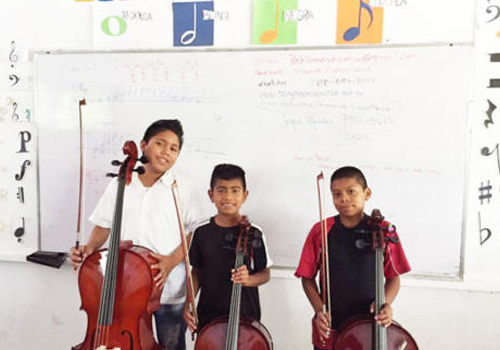 Tigers and hope: borders and music in El Salvador

“Nana, you a tiger!,” she shrieks, and I roar at her and she squeals with delight and runs her little 3-year-old escape, laughing all the way. Maya, my little granddaughter, with her funny, made-up words, her bright dark eyes, her spontaneous hugs: more precious to me than words can tell.

I read about “child separations” at the US-Mexico border—thousands of children ripped from their parents’ arms, lost somewhere: in cages, prisons, or for-profit US adoption agencies. Most of these families, torn apart at the border, are fleeing violence and grueling poverty in Guatemala, Honduras, and El Salvador. I think about our Maya and tears flow for those little, amazing, smart, spontaneous children, and their mamas, papas, and nanas who may never again hold them in their arms or play tiger with them.

Last week, I was asked to write a letter of endorsement for a Salvadoran family—a mother and two children– who had managed to enter the US, fleeing violence and grueling poverty. They would come before a judge, and a letter, attesting to their honest, hard-working, reliable character, might help. The children had been members of Armonia Cuscatleca, playing violin in the children’s orchestra in a village in El Salvador, a project currently supported by Musicians Without Borders.

Armonia Cuscatleca brings music to children living in poverty in a region ruled by gang violence, the brutal inheritance of a war that had nothing to do with them. But such is war: decades later, it leaves behind poverty, loss, division, and a culture of violence.

Hope is merely the decision to act

I see the photos of the children of Armonia Cuscatleca, playing violins and cellos in an orchestra, smiling, laughing, making music together, performing on stage, representing their village for their families, in neighboring towns, even for the president. Again, I think of Maya. If she lived here, in El Salvador, how I would wish for such an orchestra for her.

Hope is merely the decision to act, they say, and this children’s orchestra came into being because someone decided to act. A young Salvadoran musician, raised in the US, returned to his native village with a few donated violins and started a to teach children to play music. Some children leave, their families fleeing violence and poverty. Others stay. And the orchestra grows and something like a community, something like hope, emerges.

In a place like El Salvador, or at the Mexico/US border, as musicians, how can we act? What can we do?

We can work in communities. We can bring music to places where children have nothing, we can connect with them and help build a culture of inclusion, creativity, community, and nonviolence.

And we can raise voices through our music. We can tell the stories, protest the injustice, stand in solidarity with those who are excluded, separated, incarcerated.

For all the little Mayas everywhere, let us be the tigers, let us bring on the music, powered by hope—the decision to act.