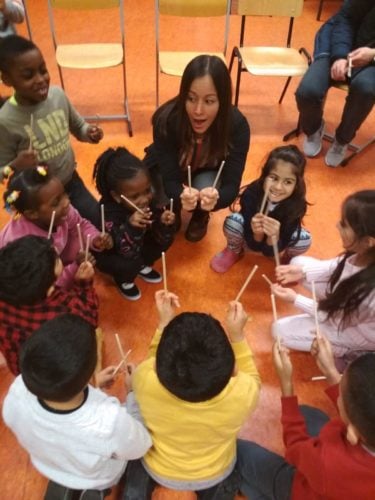 by Ryuko Reid, a British-Japanese violinist, who started playing the violin from the early age of five. In 2010 she completed her master’s degree at the Royal Northern College of Music (UK). Ryuko is resident violin teacher at the Muziekschool Amstelveen and regularly volunteers with Musicians Without Borders.

The final note of the concert is played, and they bow, like all children do, excited by the attention but a little hesitant of how to do it in unison. They look to the public, beaming with pride from their music making, and wave to the people they know.

The turnout wasn’t bad, for the sixty or so students, from Sounds of Palestine: a program for young Palestinians from refugee camps, on the outskirts of Bethlehem. Even though the students clearly outnumbered those off-stage, since its inception five years ago, every year the audience is growing.

After such a happy event, I was surprised to see a solitary cellist crying; a boy I would usually see joking around and surrounded by friends. I found out his parents had failed to attend, and his disappointment was evident. Clearly distraught, the boy, proud of what he had created craved their acknowledgment. This pulled at my heartstrings. One of the most talented cellists from the program, I had assumed his family would be supportive of his musical interests and achievements – because how else does a child succeed?

I play the violin because of my parent’s support; they paid for lessons, took me to concerts and encouraged me to practice. There is no doubt, they gave me a fantastic music education. But was it just their support that made me become a musician? In my mid-twenties I could only claim to ‘play the violin’, and it wasn’t until much later in my life, when part of a Baroque community and able to match my sound with my peers, that I started to feel belonging and value: finally able to identify as a musician and proudly say “I am a violinist”.

So, what is the boy’s motivation for playing? It goes without saying that for these Palestinian parents’ the situation in their country and within the refugee camps is, of course, a bigger concern. However, for the pupils, the school is a big part of their identity. The oldest children are around ten, have been taking weekly solo and orchestral lessons for the last five years: half of their lives. They are part of a musical community where creativity and expression are rewarded and nurtured, with children as much a part of the tribe as the social workers, choir, theory, and instrumental teachers.

Despite all the challenges of running a community music project like this, it speaks for itself that we are able to exist and thrive. As a teacher, I believe the key to its success, the shaping of children’s musical identity, is the duration and durability of the project as well as the long- term commitment from children to be part of the community.

Being who you need to be

In an asylum seeker centers’ in the Netherlands I have experienced much shorter, even interrupted ways of learning too. Although the weekly music workshops I run for the center have been ongoing for many years, the children, because of their temporary circumstances sometimes take part for as little as three months. A difference is that here the children aren’t learning instruments but how does an uncertain time frame affect building a community? Here time becomes a totally flexible entity because the participants are in a constant state of flux with the arrival of new and departure of old families. The impact of time on individuals is hard to determine as they are living in a state of limbo where time is also less tangible.

For the people who come through this center, they have a choice to take part in something regular yet flexible in a welcoming safe space. I like to compare the workshops to ‘the room of requirements’ in Harry Potter’s Hogwarts. This magical room is known to transform itself into whatever the witch or wizard needs it to be, at that moment in time. In the same way, we hope to offer the participants whatever they want, for the moments when you want to escape, to have fun, to make lots of noise, to be sad or just want to be with other people.

Unfortunately, there is no simple antidote for the disappoint of the cellist who cannot find his parents in the audience or for the children who are forced to leave their home countries, but the schools in Palestine and the asylum seeker center are community that’s waiting for them. I believe there is no better way to feel a sense of belonging than with music as long as we don’t reject a child for being themselves, the group can help teach them to share, to listen and to be listened to.

I had the pleasure to witness how a blossoming friendship between three boys from Syria, Iran, and Sudan at the center had done just that. They did everything together and in the music workshop, when I asked one of them to sing they would all sing as a trio. I overheard a simple but beautiful sentence as one of the boys declare to the other two, “jullie zijn mijn broers”, you are my brothers.