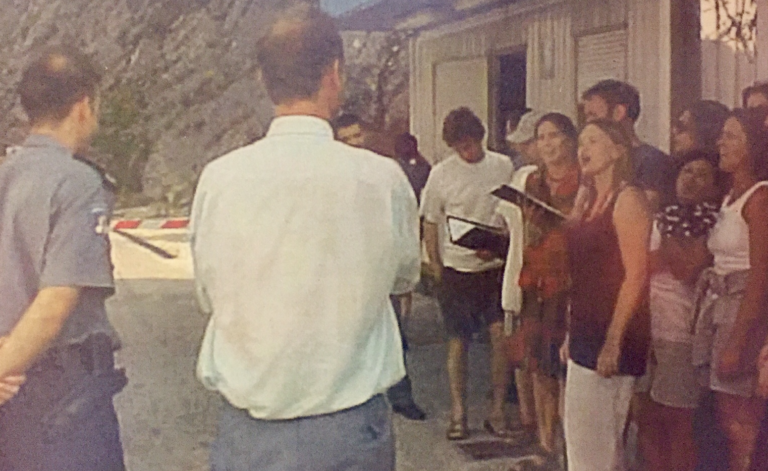 20 years of peacebuilding through music

To close our end of year Story of Light series, our founder and director Laura Hassler reflects on 20 years of peacebuilding through music.

2019 will mark 20 years since a war memorial concert sparked what was to become a community, a movement and an organization: Musicians Without Borders.

Twenty years ago, war raged in the Balkans. Today, those guns are silent, but the effects of war still rage in the hearts, minds and lives of so many. Musicians Without Borders still works in the Balkans, with the now independent Mitrovica Rock School in Kosovo and two new rock music schools in North Macedonia. This coming year we will return to Bosnia, working with musician friends to support refugees from other war zones. How tragic and ironic, that one of the dangers for ‘new’ refugees traveling through Bosnia, is the ‘old’ land mines, still strewn throughout the country.

Fifteen years ago, we organized our first international gathering in Sarajevo. Fifty musicians from the Balkans, the Middle East, Cyprus and western Europe met in the Sarajevo Music Academy to start a global network, using the power of music for reconciliation, justice and peace.

Nine years ago, two Musicians Without Borders trainers brought the inspiration of Palestine Community Music to Rwanda and worked with young Rwandans to create Rwanda Youth Music. To date, more than 150 community music leaders have been trained to bring the joy of music to vulnerable children. The project has expanded to include trainings in Tanzania and Uganda, as well as with young Burundian and Congolese leaders in refugee camps. Thanks to their passion and their new skills, thousands upon thousands of children now come together to sing and write songs, drum and build instruments.

Recent years brought invitations to work in Northern Ireland and El Salvador, and our own decision to engage in the ‘refugee crisis’ in western Europe, adapting our experiences of years of working with local musicians in support of vulnerable people.

All of these projects are still going strong, continuously growing and changing as they expand regionally and are integrated into permanent programs, and as leadership becomes locally based. At the same time, our own community grows and diversifies with new leaders and trainers from the project regions: we meet, exchange and learn from each other, share resources and train others around the world as socially engaged activist musicians.

We have grown from a small group of volunteers with a vision, to a professional organization and a world leader in our field. Our growth has been slow and organic and has allowed us to learn, and to teach, and to learn again. In 2019, we will celebrate 20 years of Musicians Without Borders, we will also be making choices for the coming years: how fast and how far do we want to grow? How to increase the impact of our work, while preserving the caring community that is so crucial to our identity? How to contribute to larger movements and networks for social change and peacebuilding?

As we look back, and forward, the core message of Musicians Without Borders continues as true as it has been for 20 years: war divides, music connects.

Eyes on the Prize: In hard times, doing what we can do and why this is so urgently important