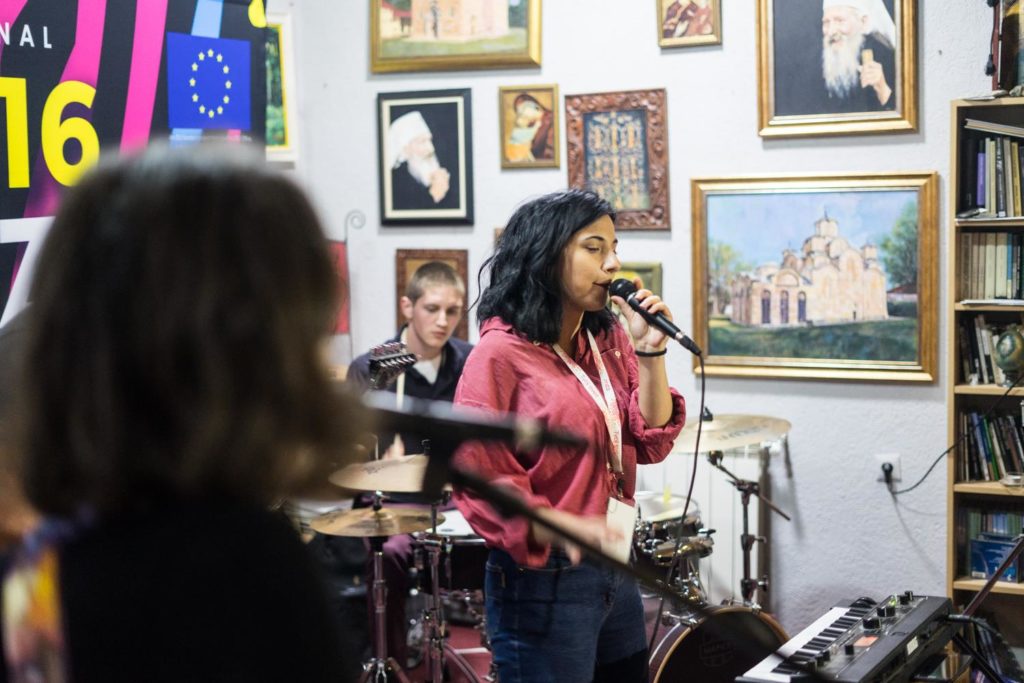 Our first time in Mitrovica

There comes a moment in life when you just want to free yourself from everything that is happening around you. You want to feel safe and free and accepted, and I guess I reached that point that night.

I remember when I first started at the Rock School, I felt like an outsider and wasn’t sure if I belonged. During the summer school I would go to my hotel room at 10 p.m. to practice my instrument while everyone was partying and having fun outside. I was always shy to meet new people, but somehow I felt connected with Proximity Mine from the first day that our journey started. I just loved the idea of bringing people together and doing what we were made for: music.

Although it was a long ride, we reached our goal, we made it, we shared our music and our need for reunion for the people of Mitrovica on May 14 at the North City Jazz and Blues Festival.

My family and friends freaked out when I first told them that my band had been invited to play at the opening of the festival in a gallery located on the north side of Mitrovica. But I managed to convince them everything would be okay.

That day, when we met for the sound check at the gallery, the guys made fun of me because I didn’t carry any equipment and didn’t know how to fix the keyboard stand. But hey, I’m still learning!

They introduced me to the organizers who were really kind and happy that we would be a part of the 16th  Jazz and Blues Festival. After the sound check, we went for a coffee break in Soho bar in north Mitrovica and waited for the opening ceremony to start.

When we arrived at the gallery, we had a few interviews with Serbian media, after which we watched a documentary that left everyone of us speechless. The documentary was about “The Big Band,” a jazz orchestra conducted by a Serbian musician with band members who were both Serbs and Albanians. It left us in tears from how beautiful it was to see people spending their days together, making music together, being there for each other in good and in bad times. And what made us even prouder was that we were trying to continue what had existed over 18 years ago, and we did it that night.

After the documentary we performed our original songs for the audience and everything went better than we imagined. In the end everyone was hugging each other. We celebrated at the after party in KRIM Club, which shares its space with the Rock School.

It was one of the best things that I will always remember. You don’t normally get to see me dancing with half the crowd until 2:30 in the morning…

There comes a moment in life when you just want to free yourself, and I did that that night, and it was just the beginning of a beautiful revolution.