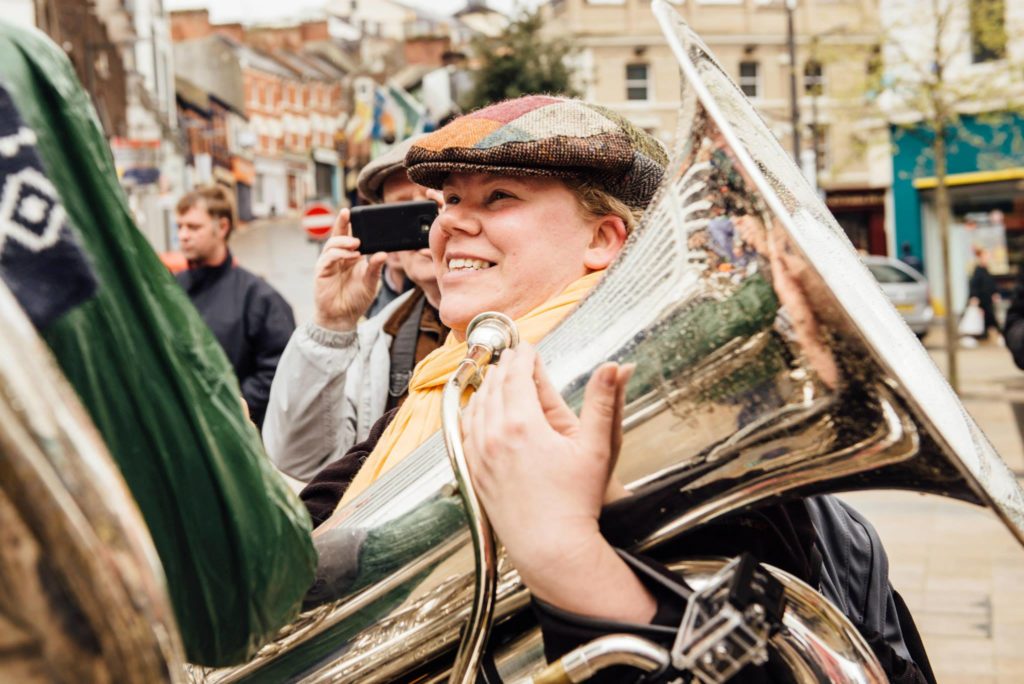 Amanda Koser-Gillespie is a trainer for Musicians Without Borders and the program manager for the Music Bridge program in partnership with Cultúrlann Uí Chanáin in Derry/Londonderry, Northern Ireland. Amanda is a multi-talented musician, which extends to her qualifications as a music educator, ethnomusicologist, band director and performer. She is also the founder and director of Second Line NI, which has introduced New Orleans jazz street performance (‘second lining’) to promote shared musical experiences through community music making in Northern Ireland.

What do you most enjoy about your work with Musicians Without Borders?

For me, working with people from different backgrounds. Sometimes, a lot of the work you do, you’re alone. It’s easy to feel you get into a little bit of a funk. When you get to work with different people, you get to hear different insights on how they use music. We all use the same tool but we all use it differently. We inspire each other.

What do you feel you uniquely contribute as a trainer for MWB?

For me, my formal background is in music education and ethnomusicology. To fuse those together, and to also use my personal experience with synesthesia, it allows me to listen with others to music in different ways, to bring in the tactile and visual, not just aural or audio. When you look at music as an experience in feeling, it isn’t just emotion, it’s touch. Those are the things that humans crave when they feel unsafe.

What has been a pivotal moment for you as the music coach in the Music Bridge project?

When a workshop completely goes in the direction that you didn’t want it to go. I had 24 twerking seven year old boys [in one workshop]! You learn very quickly the difference between leading and facilitating and the idea of control. The more you struggle to hold onto control, the more resilience you are going to develop. For me, that’s a big turning point. People always want to hear these great stories about great workshops, how they touched everyone’s life. No one hears about the workshops that bombed! Those are the ones we learn from.

Have you noticed any lasting effects of the Music Bridge project on the trainees? The community?

Yes. With the trainees, people that I started with in the year one course (2014-2015) have developed different ways of approaching communication in their line of work. It’s lovely to see that something stayed open for them. Every so often I bump into a child who was part of the year one trainee workshops. They remember the games and the songs. That excitement is a big deal as it’s one of those moments as they get older, that’s something they’ll look back on. And to see some of the friendships that have budded between the children, that breaks down some of the cliques within their classroom.

What projects are you currently involved in?

I’ve got Music Bridge – for which I’m currently reshaping the training program, also the All Access Traditional (workshops) with Josie Nugent. The Second Line workshops are also starting up. In school workshops, both primary and secondary, we use music as a way to address social behavior and communication.

In conversations with friends who work in conflict resolution, topics revolve around the fact that Northern Ireland is still in conflict. So many things are unresolved and have come back to remind us in a big way that these matters were never dealt with and need to be in order to move forward.

Within our work, what comes first is connecting people on an emotional level without using the typical roles of identity. Whether we have a project that is considered cross-community or single identity, we do our best to make sure we’re not reaffirming the vision of two communities. There’s so much more than two communities in Northern Ireland and people have many more layers than that. The program looks at music as a way to humanize an experience, to remove judgement, and to remove stereotypes, of what or who we think the other is.

Experiences from a Palestinian workshop leader