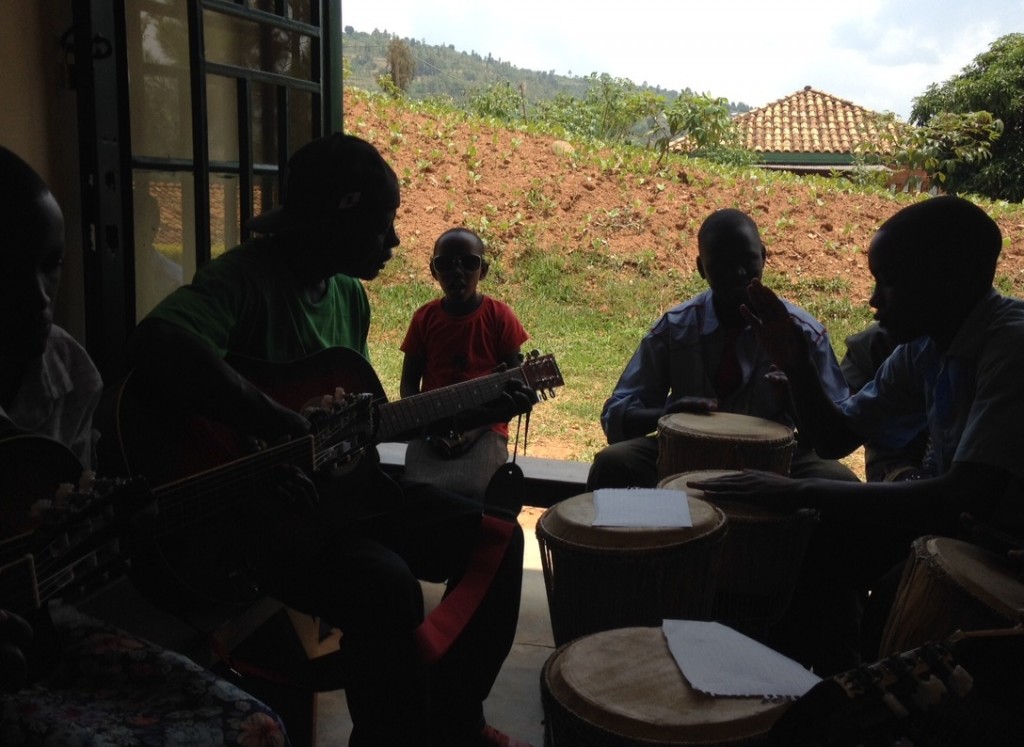 “No Chris, I think it should be this…” and he corrected my attempt to capture the song’s rhythm, looking slightly sheepish, but with the glint in his eyes that he had the groove. The group moved with his feel, where they had stuttered with mine. D, G, D, A with a clave rhythm on each chord; some Congolese influence to a gospel song, where my version had missed that.

But I could join the new beat. We all could join it. We didn’t all know the words, but we could all join the melody.

Each week someone in the group comes with an idea; a song, a lyric, a beat, an instrument from which we begin. This week it was a song. We listened as she sang it; solo, brave. Whatever she had sung, we would have accepted it. No matter how her voice had sounded we would have valued it. Whatever that beginning point, it is our cue to participate together. It gives us the entry point to our interaction, and a basis for each member to find their own way to be included according to their musical response.

Our attention focused on the young man who had corrected my rhythm. He demonstrated for us, and slowly showed us how to mirror it on guitars and drums, and then how it fitted with the vocal rhythm. Twelve young people performed together, concentrating sporadically on their colleagues, their instruments, and the song’s words. People passing by turned their heads towards our open door. Children came and sat on the grass outside, grabbing the spare instruments so they could join in.

In that moment there was not isolation, stigma, or ill-health. No marginalization. The music provided the opportunity to perform something different – inclusion, acceptance and well-being. And the community outside of our group wanted to join us.

Moments like this group session recall clearly Tia DeNora’s notion of “music asylums” (DeNora, 2013). DeNora argues that music can furnish people’s lives with opportunities for “asylum”, which she defines as “a making of room – for creativity, expressivity, flow and flourishing; on the other hand, it is a way of gaining distance (space) from pathogenic factors that foster distress, pain or oppression.” In the example of this group, music therapy is facilitating this opportunity. Group members are then each defining the terms of the asylum that they seek, by selecting music and finding their own musical manner of entering the created space.

Of course, as with any musical performance, ours ended. What we hope, and what participants experience, is that the performance of connection, creativity and well-being continues.

Some group members would have left the support group and returned to situations of isolation. Some would have returned to a home where they are marginalized due to the attitudes of their communities towards HIV. In such everyday situations there is less opportunity for creating asylum, due to societal, economic and political factors. However, the experience of ‘music asylum’, as well as offering some temporal release from ‘stress, pain or oppression’, also opens up both the possibility and a resource for future relief. The experience of acceptance, inclusion and wellness can be accessed outside of the group. The knowledge remains with the group members that music can be accessed as a resource for health, while the experience of ‘flourishing’ within ‘creativity, expressivity, flow’ ignites this possibility (with or without music) in everyday life.