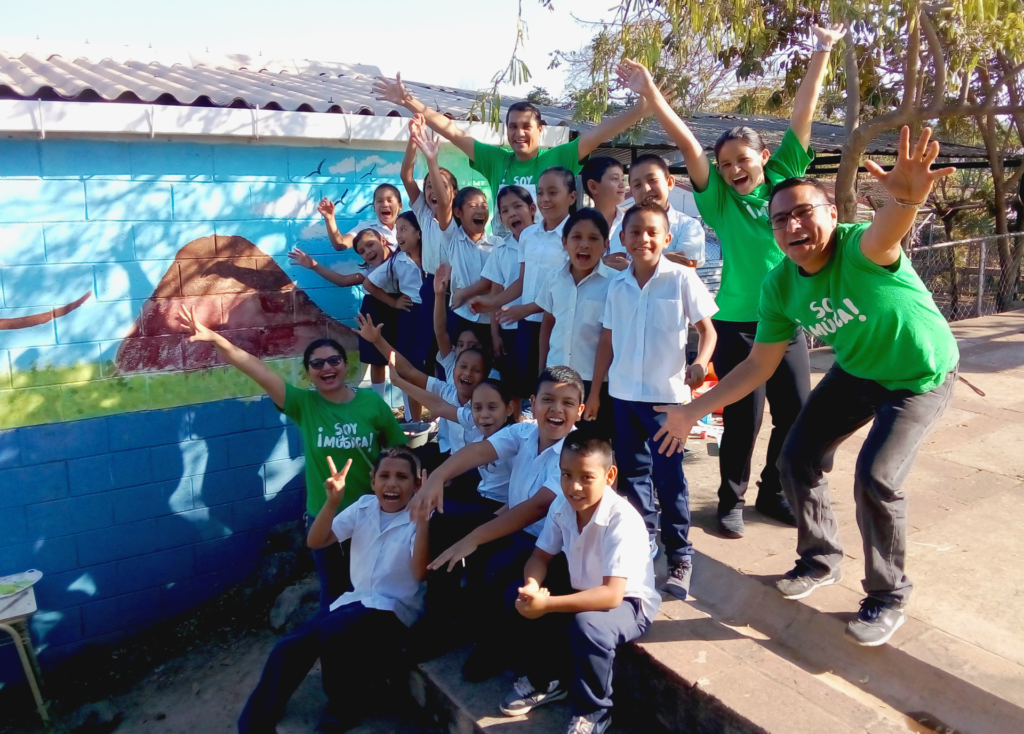 Marna joined Soy Música in its second year. She teaches at a school in Colonia Nueva Ilamatepec, in Santa Ana, a rural community of relocated victims of the eruption of Santa Ana’s volcano, in October 2005 – a community that had to recover from the loss of infrastructure, people and land.

“For three years, during the repopulation of the area, they had no school,” Marna recalls. “Families from the rural areas lost most of their income, and could no longer bring their children to the school in town. The families were very concerned, so they came together to solve the problem. They found a group of four teachers to start a small school for the community, and I was one of them.”

This allowed children from vulnerable families who relocated after the crisis to go to school again. “Unfortunately, we didn’t have enough teachers to cover more than the primary school years, so many children only received a very basic education.” Without access to further education, opportunities decreased for these children, adding to the already existing economic inequality.

Marna explains the impact on the community: “With plenty of time and no opportunities for the young ones, the conditions made it easy for gangs to prosper and take control of the neighborhood. Public spaces would be claimed as their territories or ‘areas of control’, limiting freedom for everyone.”

The community was eventually classified as a high-risk area in El Salvador.

But things are changing. Today, Soy Música intervenes as a positive and nonviolent response to this type of situation. “The project has given us the opportunity to tackle the violent dynamics from within the school.”

“The Soy Música sessions that we developed with a team (Rosa, Mariana, Benjamin, Nelly and Marna) in our school were filled with laughter, positive feelings and emotions. Children got the chance to express themselves, feel included, and feel safe.”

To end the first year’s sessions, the team decided to create something special to represent Soy Música’s presence in the school. “We asked the children what would be the best way to remember the laughter, joy and enthusiasm the project had brought to our community.”

This is how ‘The Space of Nonviolence’ came to be. Everyone participated in the creation of a mural – by painting, drawing or cheering on others. “It was a beautiful moment, where we shared and created together.

Creating this space together allows students to take full ownership of the activity, letting them feel more empowered. It promotes positivity in the school, and challenges a big problem here in El Salvador: the lack of spaces for creativity.”

Today, Soy Música is being implemented nationwide, with more than 200 teachers and community leaders participating. The initiative, co-led with the Ministry of Education and UNICEF, helps teachers establish space for creative expression, promoting the use of peacebuilding through music in their schools and communities, reaching thousands and changing their lives.