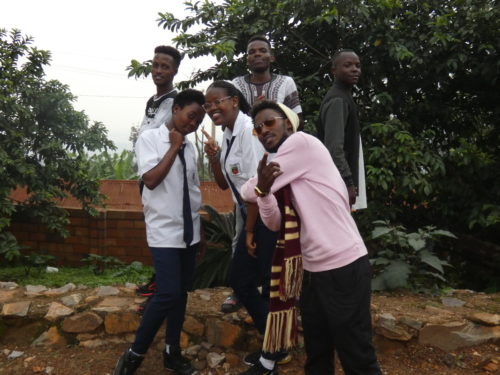 In January 2020, we began a very exciting new collaboration across Musicians Without Borders programs, bringing the expertise of the Mitrovica Rock School to Rwanda Youth Music’s team of passionate community music leaders.

Emir Hasani, a director of the Mitrovica Rock School in Kosovo, visited Rwanda to lead a week-long Band Camp, working alongside three Rwandan MWB trainers. Our aim was to introduce the band coaching methodology developed in Mitrovica Rock School as an additional, new way to provide support through music to young people. Twenty young community music leaders participated in the week, along with ten trainee music leaders. These young people work every week with hundreds of children and youth from marginalized communities, including young people living with HIV, former street children, those with needs for learning support, and people experiencing poverty.

Amazingly, on day one of the camp, five new bands were formed. Each band wrote two original songs, recorded one song on day five, and performed both songs in a public concert on day six.

A film crew followed the process throughout the week, capturing both the challenges and the successes.

As a further result of the week, a rehearsal space was equipped in the Community Music Center in Kigali, where we run activities every week. Drums, amps, guitars, bass guitars, speakers, and a mixer were bought, made possible by very generous donations. These materials will stay at the centre for the bands to use, along with future bands. The center will also use the materials, furthering their impact, supporting local music education, and the music industry.

The next phase of this program is to run a music camp for children later in the year. This will integrate band coaching with community music-making activities, giving a fun and creative experience culminating in the empowering experiences of the children recording and performing their new songs.

This week was made possible through the generous support of Wings of Support, iZotope, D’Addario, anonymous donors, and donations from individual supporters. Thank you all.

How we are working in the Democratic Republic of Congo