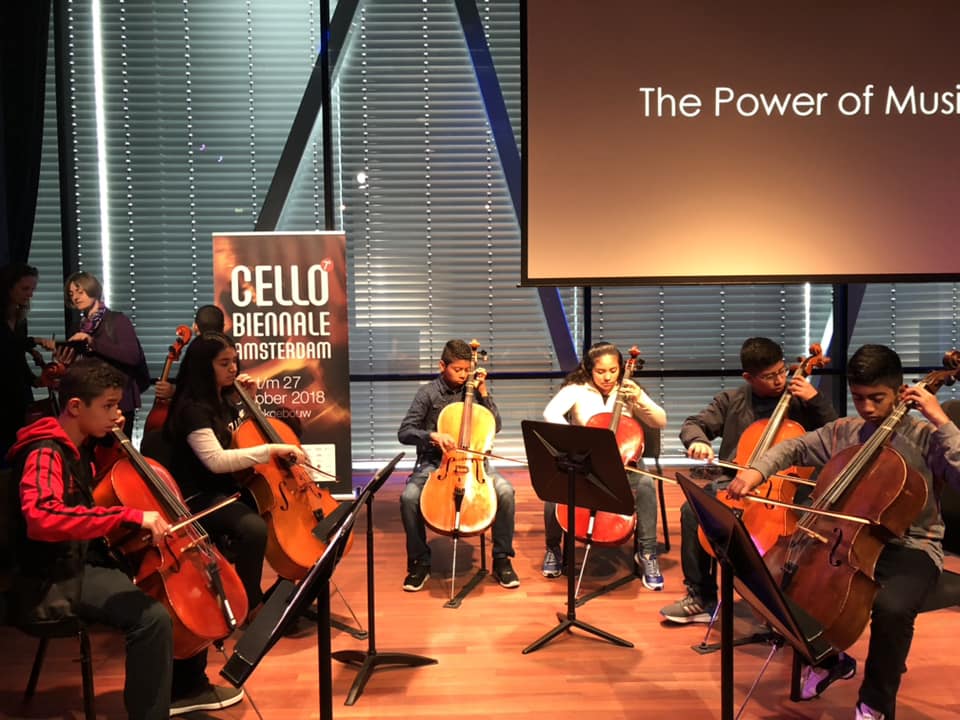 Interview with Pablo Mendez Granadino, founder of Armonia Cuscatleca, about growing up in a family of musicians, his native country of El Salvador, and how he used his music education to start a musical education program.

What brought you to music? Has it always been part of your environment?

Life has brought me to music. I am very lucky to have been raised by a family of musicians. To my knowledge, I am a fourth generation musician coming from string players, marching band directors, singers, and composers.

Do you play an instrument? If so, which one and why?

I’d like to say I’m a violinist by trade, although I love to jam on the piano, guitar, bass, cello, and percussion. My father is a professional violinist and he gave me a tiny violin when I was about 4, since then I always felt it necessary to keep playing. I remember as a kid wondering when the school day would end so that I can get home and practice, both to please my father and feed my obsession.

When was Armonia Cuscatleca founded? What was the inspiration?

Armonia Cuscatleca was founded in January 2016. I finally had the chance to visit my native country El Salvador after more than ten years. During my visit, I stayed with my grandmother in a small rural town San Pedro Perulapan. I instantly fell in love with what my country has to offer. Every June, San Pedro celebrates its ‘fiestas patronales’ with a carnival full of music, rides, typical food, and comedy acts. From about six in the morning to midnight daily, the organizers hire marching bands to join them through the streets with celebratory caravans. I was told that the instruments used by the school bands are kept away in closets until the fiestas happen again in September, then again in June.

Why would they compromise the chance of better quality musicianship? Why don’t they hire full-time music teachers? Since I had been working with Harmony Project in Los Angeles for about 5 years (Harmony Project is a non-profit that offers high-quality music classes in poor neighborhoods of LA), and witnessed how music can change entire communities, I decided that San Pedro Perulapan could also prosper from community music classes.

How was the project initially received by the local community?

The project received a lot of help from the local mayor’s office, the consulate of El Salvador in Los Angeles and the public school system. The mayor along with the consulate helped organize for the instruments to be shipped without taxation. They coordinated with the Ministry of Education to give us a classroom in the local elementary school. There was a lot of excitement and positive energy in the community.

How has the project grown?

The project has grown in size and popularity within the international community. We now have a steady 45 students receiving violin, viola, cello, and contrabass classes. We have been praised by the president of El Salvador Sanchez Ceren and been on many television and radio programs.

Then in 2017, I was introduced to Musicians Without Borders. They have introduced so many community music techniques as well as ways to cope with working in a violent community. We were very lucky and fortunate to be invited to the Cello Biennale in Amsterdam by Musicians Without Borders and hope this is only the beginning of our opportunities to travel internationally.

Because there are no professional musicians in San Pedro, I feel the children have no one to look up to musically. I think it is hard for them to imagine a life in the music industry and look at it as more of a hobby, which is fine. Children in LA have the Hollywood Bowl, the LA Philharmonic, Capitol Records, and the Disney Center to inspire their participation in the music industry. The children and community in El Salvador need more inspiration to help push towards playing music professionally. However, Los Angeles is massive compared to San Pedro Perulapan, with our 43 students, it is possible to say that almost every family is connected to Armonia Cuscatleca in some way.

Overall, how did parents initially react to the project? Were most parents supportive of their children playing music?

Most parents are very happy to have their children playing music. I have had conflicts with a few parents about the repertoire we play, or where or for whom we play. I recently had a very interesting conversation with one parent who believes that Harry Potter was demonic and anti-christ. He didn’t want his child to participate while we played the theme music from the Harry Potter movies. We came to terms and the student keeps coming to class, I exempt this student from playing Harry Potter music. Also in El Salvador, as I mentioned earlier, music as a profession is still taboo. It is related to alcoholism, drug usage, a waste of time and impossible to make a decent living. I think my father, myself and the musicians we invite to the pueblo are able to tell a different story. Life of a musician is definitely difficult, but which profession isn’t?

Was there a specific moment in the project when you realized, “this is really working”

I think that one of the main reasons for the commencement and growth of this project is to help San Pedros’ sense of community. To fortify the population and help them forgive and forget our violent revolution in the 80’s and 90’s. To have us smiling and laughing again. We are not a materialistic people, we do not need much to make us happy, what I think we lack are opportunities to feel empowered or dignified. Salaries are very low, work hours are very long, families are broken from violence, immigration or health issues, many fathers are missing. As a community, Armonia Cuscatleca decided to have a typical foods sale to fundraise for the ‘day of the dead’ celebrations in our local cemeteries. Many parents and children alike donated their time and energy this day. We were rained on, our shoes covered in mud, but everyone kept smiling and laughing. For the sake of the continuation of music classes, the community came together and forgot about their politics, about their religious differences and the violence that plagues our communities. This was when I knew music or the want of music for lack thereof, can help heal our wounds of war and poverty.