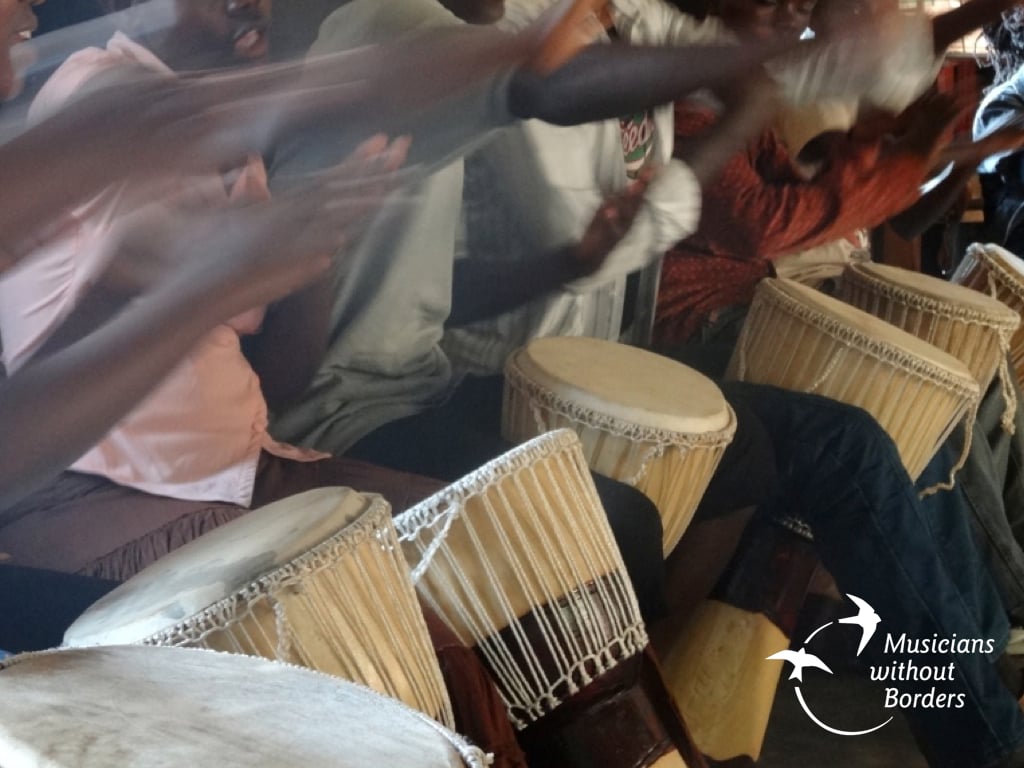 When the rain comes down in Kigali it bounces off the ground and pounds on the sheet metal roofs. The past few days have been dry and hot, but this is rainy season. Normally it will rain for just a couple of hours in the afternoon, freshening up the air and clearing the humidity, making sure the avocados and papayas keep growing in my garden. But at its strongest, it’s the kind of rain that can wash things away.

Last week, as I sat down in a meeting with the youth leaders, the rain started. We were in a classroom with metal shutters on the windows, and a corrugated iron roof. The volume generated by the rain hammering down on the roof and shutters made it impossible to talk. The youth coordinator sitting next to me had to shout for me to hear her. She asked that I do some music as it was pointless trying to discuss anything. So we started with a rhythm, following each other’s movements visually as much as sounds, until our combined volume was enough to carry over the rain. We added some words, and together we made enough music to hear ourselves and to interact. After my song, we took turns to start the music, pushing back chairs and tables to be able to dance as well. From a group that couldn’t communicate because of the rain, we had become a group that was fully communicating, enhanced by the background drone of Rwanda’s rains.

The idea of outside and inside as separate spaces can be an important framework for therapy. Inside the therapy room are safety and confidentiality and the trust needed to explore what’s outside. Inside the therapy room it is possible to experiment with ways of being; to try out versions of our identity; to come to know ourselves at first in the controlled construct of the therapeutic space. However, at times the context encroaches on therapeutic boundaries, and the separation of spaces is impossible. When rain’s banging on the roof, you can’t pretend it’s not there.

Talking about her work with a community arts project within a community ravaged by HIV/AIDS, Professor Mercedes Pavlicevic writes:

Within the conventional music therapy framework, we think of ‘outside’ and ‘inside’ being distinctive spaces. Here at Thembalethu we cannot close the door to everyday life, and in any case, the searing heat means that every possible window and door remain open. The heat of the outside world is, simply, a part of the work that we are doing and, in fact, it is not outside at all; it is right here, within the room where we work. ‘Life’ and ‘therapy work’ are inseparable, in the spacial, temporal or mental sense.

Working with the door and windows open is not a conventional model of music therapy work. It immediately alters perceptions of confidentiality. But as Pavlicevic says, that is “simply, a part of the work that we are doing.” The context is inherent to the work.

The music I made with the youth leaders was not meant as music therapy. My role that day was not as music therapist, and there were no therapeutic boundaries established. We were a group of friends and colleagues having a meeting. Music became the way we communicated.

With the rains come day to day problems and these issues affect every aspect of life, including therapy. People don’t like to travel when it’s raining. They don’t like to stand in a storm waiting for a bus, or wade through mud in their shoes. Nobody should be on a moto-taxi when it’s raining hard, as it’s really very dangerous. Participants arrive late or early to avoid the downpours, the sounds of weather permeate the room. Music therapy deals in sounds and lives, so this is very much “simply, a part of the work that we are doing.”

My first set of music therapy groups is now established, working with adolescents whose lives at times may ask for the door to be firmly closed on the music therapy room and for all conventional music therapy frameworks to be maintained to the best of our abilities. Other times the outside may come bursting in like thunder and storms, and life and therapy work may become inseparable.

How we are working in the Democratic Republic of Congo