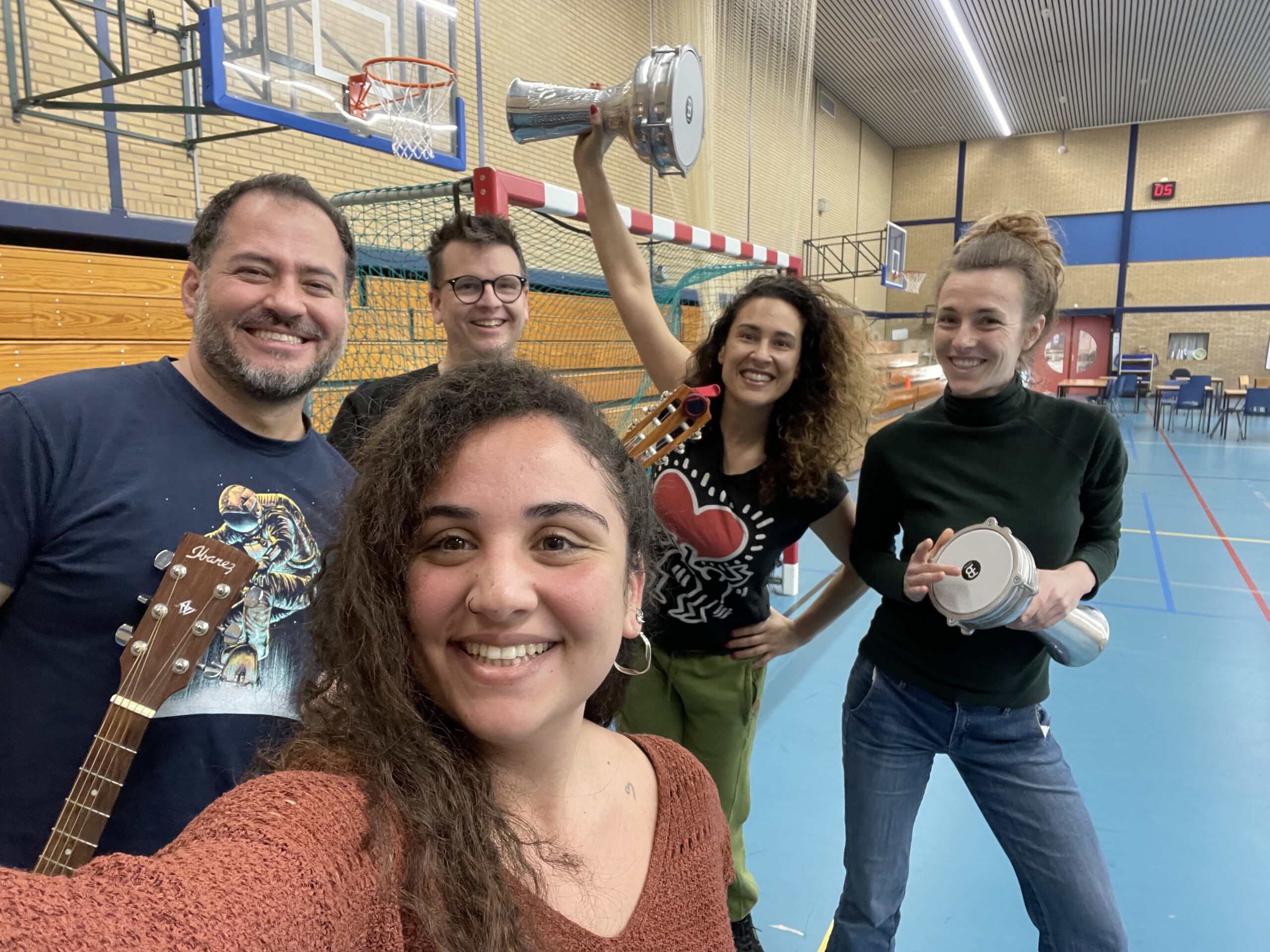 By Ed HollandOctober 5, 2022No Comments

In July, we interviewed, Zosja El Rhazi, a professional singer, conservatory teacher and music workshop leader with our Music Bus NL project. In this interview, Zosja reflects on her experiences with MWB, dating back to our first Welcome Notes training in 2016.

MWB: Can you tell us a little about your background?

Zosja: I grew up in the north of Holland and I am half-Moroccan. Growing up there, me and my mother made a lot of music but I did not always feel included in groups because of my skin color. I think it really affected the rest of my life being aware of feeling included or not…being confronted with that. I think that’s one of my reasons to make contact with people…make music together and connect with each other. That comes from deep within.

I studied theater after high school. After that I went to the conservatory to study vocals. I just love so many things, so many styles. I am oriented in a very wide range of music, doing a lot of projects, playing with a lot of bands, and composing. I am currently studying Haptonomy – which is about the body and sensing your emotions. I want to become a therapist, to help people to get back into their bodies and connect with their emotions. When you are making music together, it’s about that flow and about that emotion that you share. In being present, you have space to be together without losing yourself. You are still there, you’re you, but you’re also connecting with others. I’m studying that now to help artists prepare for concerts when they feel anxiety.

MWB: Can you describe how the Welcome Notes training prepared you as a workshop leader for the Music Bus NL program?

Zosja: [There are] two things that are really connected with each other. Everyone needs to feel included and to reach that, [you need] to be able to get people together and communicate non-verbally. How to communicate with everyone without too many words. Just music and body language. That really helped in these workshops.

It’s not that I work with groups every week, I usually work with people one-on-one. It’s really nice to have colleagues who are so experienced and it felt really safe to be together with them, to know they have such a big repertoire of activities. That allowed me to really be there, and not think ahead too much but just be flexible and still feel safe. It’s about improvising and that’s something I really love. If you communicate well together, you get into such a flow. When you are doing those activities together, you have a lot of antennas for the children…but also you are connecting with the other workshop leaders in a really interesting way. You are so aware of what the other is also giving or ready to give and then you just give each other the space and help each other with that. That was really a great experience and I learned a lot concerning working with children.

MWB: How would you compare your experiences with the Music Bus NL project to when you were running workshops in emergency centers in 2016-2017 after the Welcome Notes training?

Zosja: The first big difference that I noticed, when I did it 5 years ago, it was mostly for adults and youngsters but not for kids. That was really new to me to work with children only. Those were mixed groups – boys and girls together. I think a few years back when I did workshops there were mostly men joining and not so many girls or women.

We also noticed the kids loved to learn Dutch. That’s a difference, that they actually were going to school and a lot of them already knew some Dutch. They really liked to incorporate that into the music, to do some Dutch songs, to count in Dutch and things like that. When we understood that they we eager to do that, we incorporated some of the Dutch language [into our activities].

MWB: What kind of impact are you seeing on the children and families who participate? Have you had any feedback from the staff in the centers?

I remember the first time we came there, there was a man who brought his two children but he was also a connector in the whole center. He knew everyone. He was also helping to make sure that everyone was aware that there was an activity for children. I think that really helped to immediately have a contact person who knows everyone. He was really enthusiastic about the attention we had for the children, that we were allowing them to play and to experience some beautiful sounds together. A couple of parents sometimes came and watched and they were really happy.

I think it had a lot to do with feeling that [the children] were seen. We played together with them, we always invited them, also the parents if they wanted to join the circle. The staff were really friendly and so happy there was something to do together with the children. We saw them, we paid attention to all of them, and made a moment together, created some togetherness.

MWB: Do you see yourself applying the skills you learned from your experiences with MWB in other ways?

Zosja: Yes, I do. It’s been two years now but before that I had one group lesson at the ArtEZ Conservatory where I teach. It was a workshop for singers about improvisation and circle songs. That was already a connection with what I was doing for Musicians Without Borders in certain activities. I really started to work with [the students] in that non-verbal way, just doing stuff without explaining beforehand. That was really cool because I noticed everyone’s attention is so different if they’re just experiencing things. That’s something that I really liked and still use whenever I can. I just start with something and by doing that, in that moment, I’m inviting everyone to be there and just join me.