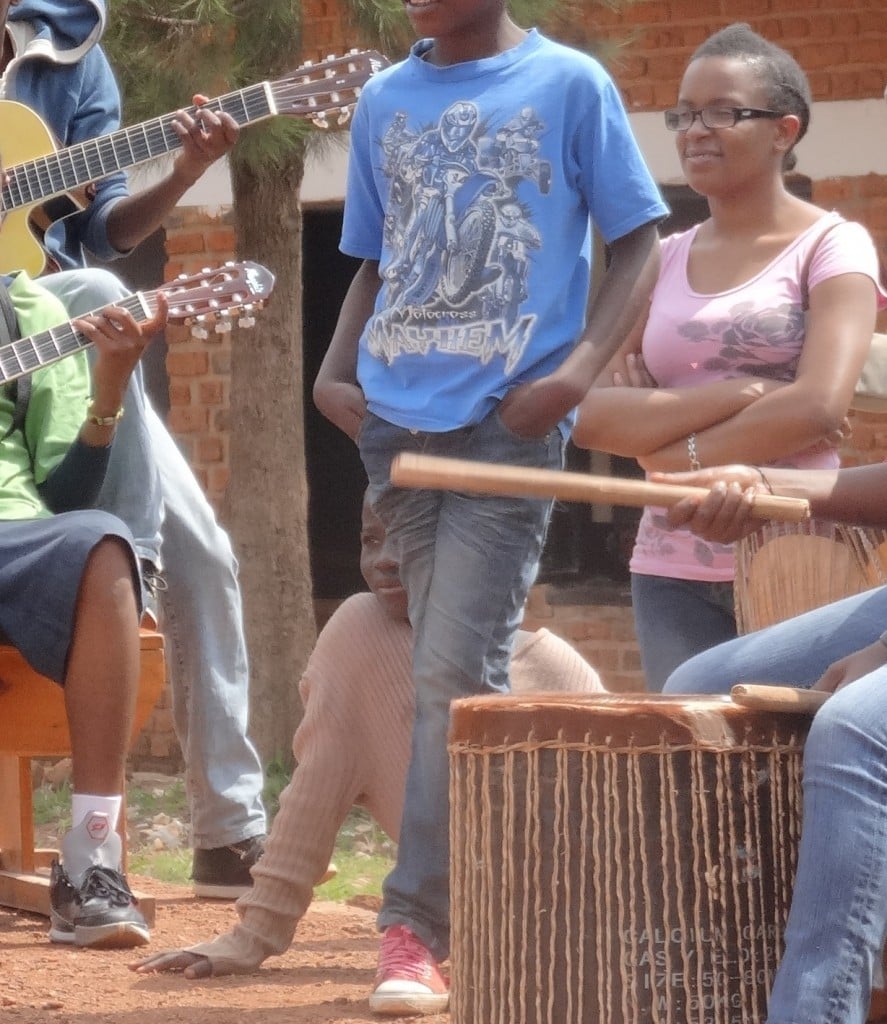 The sound and the silence of music

As a music therapy student I learnt to hear silence as an element of music. With our professor, Leslie Bunt, we listened to moments of silence within compositions and felt their impact on us. In therapy sessions we learnt to hear the breaks, the pauses, the shy restraint, the refusals to play, as music. We came to hear the silence of exclusion – due to physical, emotional or social reasons – as music.

During the week of April 7th, our project didn’t play music. Kigali Music School was closed, and our partners’ support groups did not use music. April 7th marked the beginning of the official week of commemoration of the 20th anniversary of genocide and conflict in Rwanda. Public spaces remained quiet, television broadcasting was limited to memorial programming, and the music that could be heard sang of tragedy, loss and remembrance.  Both the sound and the silence of music were present, aiming to express respect, remembrance and renewal.

Music played a tragic role in the genocide, murder and conflict that took place in Rwanda in 1994. Indeed, in December 2012, the UN International Criminal Tribunal for Rwanda (UNICTR) brought Simon Bikindi, one of Rwanda’s leading musicians, to trial. Amongst the charges was the allegation that he had written and used his music to propagate genocidal ideology and to rally the Interhamwe to commit acts of genocide.

Alongside the use of music for propaganda and mobilization, came the use of music to motivate and to unite forces. Killing squads sang songs, beat drums, and made their own music. A friend, who survived being targeted by those squads, told me:

“…they were going singing and with marching songs … they were trying to sing with energy to terrify, and people fearing… you were trembling, it was very, very scary… sometimes you could touch on your body and you don’t sense anything.”

“Because the tutsis were hiding, they couldn’t sing.”

Music had always been a fixture in the events of everyday life in Rwanda. Music was used in work, celebration and rites of passage. In rural communities songs were sung in fields to accompany the rigorous labour of manual agriculture. This traditional use of music was transferred to community work projects such as road building, where improvised songs spoke of the workers’ strength, and joked about sexual and drunken antics. Improvisers were so entertaining that people were attracted to join the work groups “just for fun!”

Importantly, such songs were not defined by ethnic identities. Although ethnic and political conflict did exist in Rwanda prior to 1994, in many people’s eyes until the proliferation of genocidal ideology “you couldn’t identify tutsis and hutus”, and this was reflected in a traditionally unified response to music:

“… when you were dancing together, nobody could resist the music … So it is a kind of solidarity; a cultural value.”

The importance of music in Rwandan culture, its ability to unite and motivate people, and its capacity to propagate messages, made it a powerful weapon to the genocidaires in 1994.  And the same affordances make it a powerful resource today.

Although it is sometimes easy to present music as something innately and autonomously positive that heals people and communities, in Rwanda’s history we see clearly how music can be appropriated for tragic means. This reminds me that the positive effects that we all can experience in music involves the positive actions and intentions of people to appropriate music in a positive way. As such, I think of music therapy as the active appropriation of music for health.

Often that idea leads to me watching our project here in its action and asking myself how is the music being used?  What is happening in the music?

This year marks the 10th anniversary of our local partner WE-ACTx for Hope, and on June 15th they have  organised a day of celebration, inviting all of their patients and friends. Support groups, usually focussed on education and counselling, instead are preparing performances of theatre, songs and dances for the occassion.  Youth leaders, trained by Musicians without Borders, are using their skills to work with young children to play drums, guitars, pianos, and to dance and sing for their families and friends. Last Sunday, as every week, as I watched 100s of  young people engaged in music together, interacting, coaching, coordinating, laughing, performing, I was moved.  So many things were happening, enabled by the music.

When a traditional rhythm begins, the children are instantly able to join it, connected by their shared cultural experience. They know the song’s words because a caring youth leader has patiently taught them and included them – regardless of how well they can sing. The youth leader has gained confidence and self-worth through their musical experiences with Musicians Without Borders’ trainers and the consistent presence of local musicians at weekly training. The children playing instruments have consistently arrived an hour early for their support group in order to receive lessons from youth leaders who have also arrived an hour early to share their skills.  They have sat together for an hour each week, playing music together, helping one another, sharing guitars, pianos and drums. That dedication and effort has led to them proudly holding their instruments to play with their friends. Little looks and glimpses between the musicians offer support, reassurance and connection.

The doors of the support groups are open.  The youth perform outside with on-lookers enjoying the show. Although closed-door counseling remains available, this peer-lead musical support takes place in the open, seemingly without fear of stigma or prejudice.

All this is happening in one moment. Now.

For a few of the children and youth, participation does remain hard.  Not everyone arrives an hour early to fully engage themselves. But numbers increase, I think as safety is regularly experienced in the activities, and for some of these young people clinical music therapy is offered in small groups and individually as appropriate.  Those who do not join the playing, singing and dancing participate through listening. Their presence as an audience is part of the music, as is their silence.  This silence I listen to, and try to hear what it is communicating, ensuring that it too has an audience and is being attended to.

This is music now in Rwanda. It has its message, it unites people, it motivates and mobilises.  We work to give opportunities for its appropriation for the health of young people.