The goal for the Musicians Without Borders June campaign this year is to grow our community of Changemakers. Please give today, any amount helps »

At first glance, this may not appear to be the prime place to host Musicians without Borders’ next workshop.
A closer glance may not help the location seem more appealing either- considering that the seemingly neglected pillar is actually a sign to make people aware of the Israeli military’s firing zone.
But in actuality, there is a very special community nestled in these vast, open hills of South Hebron. This area is home to a number of cherished Bedouin communities. Starting April 9th, Musicians without Borders will be hosting a Music Leadership Training Workshop for kindergarten teachers from all over South Hebron. This training is intended to benefit the Bedouin community, who according to a recent UN report are “particularly vulnerable to displacement and dispossession.1
For more information we encourage you to read the following UN-report concerning these precious communities:
Bedouin communities in general are particularly vulnerable to displacement and dispossession. Eighty per cent of them live in the Jordan Valley, the Dead Sea area and around Hebron, constituting the majority of the population in closed military training and firing zones. Many of these communities have already experienced multiple displacements. Many are food insecure, do not have access to basic services, and are not connected to the electricity grid, the road network or water systems. More than 90 per cent face water scarcity, living with less than one-quarter of the minimum standards set by the World Health Organization (WHO).2 The Israeli army routinely demolishes their shelters and property, including those provided by or built with the assistance of aid agencies and international donors. In the South Hebron hills, eight villages are at risk of eviction to make way for a new firing zone.3
Through the gracious donation of the UN and their partners, this community now has something very special in their possession, a newly donated kindergarten building. This is where we are welcomed to host our upcoming trainings in April. 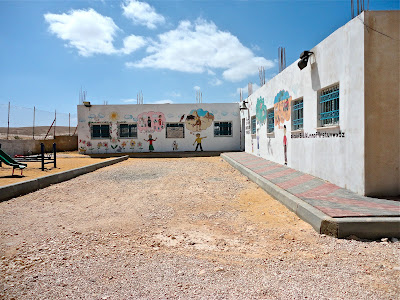 Stay tuned to Musicians without Borders to learn more about the upcoming Music Leadership Training Workshops in Khashem al-Daraj!

This blog entry is created by Kristin, an amazing volunteer from the USA. We are very lucky to have her with us for the coming months!