Please give today, any amount helps »

our work > news > Samba Fever
For the past two months, Mark, who volunteered to teach samba, has trained six different groups in al-Wallajah, al-Ma’sara, Hebron, Aida refugee camp, Silwan and a group of deaf people. Some groups received workshops twice a week, others, like Silwan just started playing and are waiting for a new trainer. Because after two months of drumming, Mark went home. These days he is editing a video clip of his latest project in Palestine: two rappers from Dheisheh refugee camp recorded a song with four drummers from al-Wallajah. Coming soon!

Thank you Mark for all your patience, understanding, teaching and facilitating the workshops!

“It’s has been nearly two months since I arrived in the West Bank, with some drum sticks, a head full of rhythms and few Arabic words as part of a Musicians without Borders project that aims to bring samba percussion to Palestinian groups of young adults. Samba being suited for group drumming as it is very inclusive. Individuals can play a simple pattern but be part of a complex and beautiful rhythm that makes it impossible not to swing your hips or tap your feet to.

I had lot’s of ambition to teach different styles of drumming, to give the four different groups a large ‘repertoire’ but also to sow the seeds for ongoing bands. The reality has been of course much more difficult. It has been eye opening to see the everyday realities of lives under Occupation affect the workshops, which at times have been cancelled due to killings, protests, checkpoint delays and today because of tear gas in and around the community center.

Fabienne and Ahmad from Musicians without Borders and also the participants of the different groups, have been amazing in regards to helping me settle in and to deal with any of these arising issues. By now I have run many workshops with five different groups, from villages to refugee camps to youth centers. It is great to see the rhythms that in the first weeks were impossible for many have now been played in front of audiences cheering and dancing. But the greatest moments are when you see the faces of concentration slowly relaxing into a smile, when the drummers start to enjoy the rhythm and their input into it.

Still lot’s to do before I go and I hope to also take away a rhythm or two taught to me by the participants. Whilst some of the groups might need more samba trainers, local or international, to come, I am hopeful that at least two of the bands have enough samba fever to continue learning by themselves.” 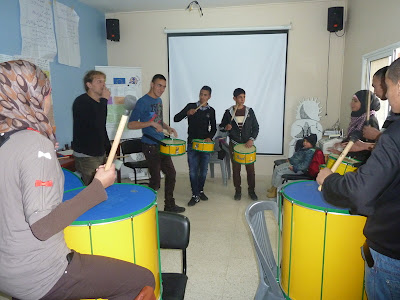